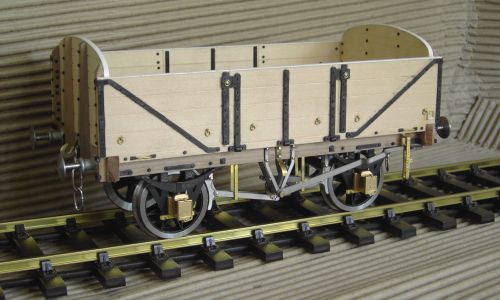 Four and five plank wagons were the most numerous of all LSWR wagons, with over 7,000 being built. The subject of this kit is a type known as T14 which were 15ft 4in over headstocks (14ft 11in inside) on a 9ft wheelbase. All survivors were classified as D1309 by the Southern after 1923, a diagram which also included wagons with steel underframes. Most originally had rounded ends which were cut down square by the Southern, and a large proportion originally had sheet rails fitted, although most were removed after the Grouping. We can supply parts for the sheet rail as a separate additional kit if required.

This is quite different to any of our other kits because the body is made of wood cut and "scribed" in the lathe. Body details are separate plastic injection mouldings and all of the mechanical parts (running gear, buffers, brakes and couplings) are from our standard range.

Assembly of the parts take far longer than with our other kits, but we think the result is rather good!