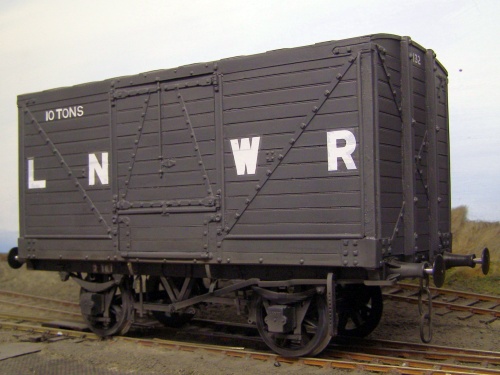 When introduced early in 1908, this became the LNWR's standard goods van, and remained so until the Grouping, by which time about 6,000 had been built, mostly as replacements for withdrawn D32 vans. Several lasted into BR days and into preservation with very few changes except for the doors. The kit includes alternative doors for the LNWR standard or LMS-replacement types.

The D88a insulated version was outwardly similar except for full height doors in place of the three doors (2 side-hinged and 1 drop-down) of the standard vans. They were identified by a large white circle painted on each side. These doors are also included in the kit.

Through-piped versions were identified by a broad diagonal stripe at one end and these too can be made from the kit, but the fully-fitted version is not yet available in kit form.

This kit is available to order now for £140.