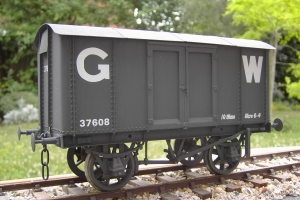 The GWR iron Mink was introduced in 1887 and standardised in 1888 at 16ft long. Very few changes were made to the design until it was superseded by a wooden design in 1901. During that time almost 5,000 were made, and they are very well known, several having lasted into preservation. Their distinctive rounded corners, steel roofs and multitude of rivets make them a favourite with modellers. The substantial construction lead to them being adopted by the RCH for transporting explosives and several railways had vans built by private contractors to the same basic design.

Similar vans were also built for most of the railways in South Wales. They were also adopted by Spillers and Baker for carrying flour, and some cement manufacturers also used them.