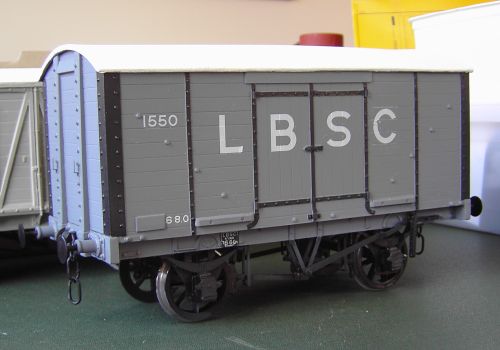 Around 430 vans of this type passed to the Southern Railway (with many modifications and variations) but by the end of the Second World War very few remained in revenue service. Apart from the survivors of those transferred to the Isle of Wight in the late 1920s/30s, it would appear they had all been taken out of revenue service by the time of nationalisation although many survived far longer in departmental use, or as 'internal use' wagons at M.o.D. establishments.

The kit as supplied represents a wagon as built from 1911 but, by omitting or modifying parts, it can be back-dated to represent a van from the earlier batches or forward-dated to include features which appeared after 1916. This kit is now almost in stock: we are just awaiting a delivery of buffer castings before they can be sold. £140 each.