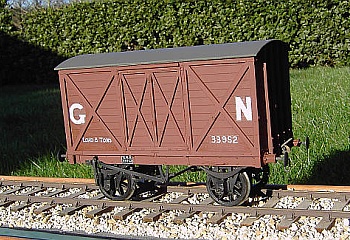 The GNR built a great many outside framed vans during the 1880s and 1890s, the most common being 16ft long and with a 9ft 6in wheelbase. About 700 vans similar to this kit were built between 1895 and 1905, when Gresley introduced a new design with inside framing. Of those, 669 passed into LNER hands in 1923.

There were small differences between batches. Larger journals increased the load from 8 tons to 10 tons. Some were fitted with through vacuum pipes and wooden bases beneath the buffers. Some had torpedo ventilators fitted into the roof. Another variant was adapted to carry gunpowder and painted white.

Brakes were interesting on the GNR and this kit includes the type with a single block on each side and both brake levers at the same end of the vehicle.

This kit is £125. Transfers are available separately.