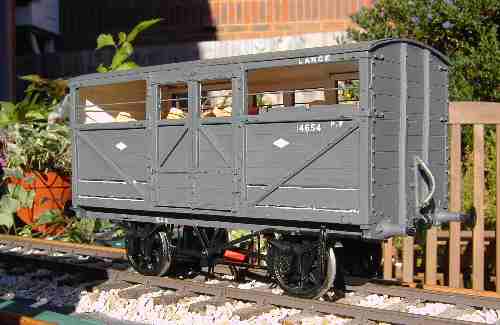 The LNWR large cattle wagons were built in large numbers, there being 469 in use by 1863 (964 medium at the same date). These large wagons were 17ft 10in long, some were roofless and some had dumb buffers at one or both ends. The length was standardised at 18ft 9in for all new construction after about 1894 and these are the vehicles represented by this kit. By 1898 a single cast iron brake block had started to replace the wooden one but still on one side only, and from a similar date vacuum pipes were fitted (not vacuum brakes). Oil axleboxes started to be fitted from about 1910 and a second iron-pushrod brake fitted to the second side.

By at least 1909 the design of new wagons had changed slightly, with rounded corners to the strapping on the drop doors, welded strapping at the corners and a different design of kick-strips on the floor. The kit is thus for example built c1894-1909, which would have lasted well into the 1920s. 891 large cattle wagons passed into LMS stock in 1923.