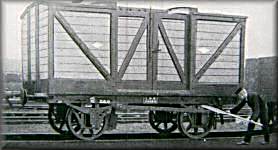 The LNWR was using covered vans with sliding doors in the roof at least by the early 1850s and remained true to that type until the turn of the century.

The vans best known to historians today are what, in the 1903 diagram book, became Diagrams 32 and 33. Quite when D32 was introduced is uncertain, but it seems that they were around in much the same form by at least 1860. With a sliding door in the roof and double sliding doors in one side, wagon turntables had to be used to ensure the vehicle arrived at the dockside or in the goods shed the correct way round. The total number of D32 built exceeded 8,000 but numbers had begun to decline by the early 1900s and only a handful survived into LMS ownership in 1923. Sometimes official statistics can be misleading however as one van was photographed in 1938, still carrying its pre-1910 LNWR livery, although it was then for internal use only!

In 1894 an improved design, later to become D33 was introduced. The two main differences were the length which was increased from 15ft 6in to the new standard of 16ft and pairs of sliding doors were fitted to each side, rather than just one side.

From surviving photographs there seem to be very few differences between these vans. All retained their 3-bolt 10in buffer stocks throughout their lives and all photographs known to me show only a single wooden brake block on one side, even the picture taken in 1938! 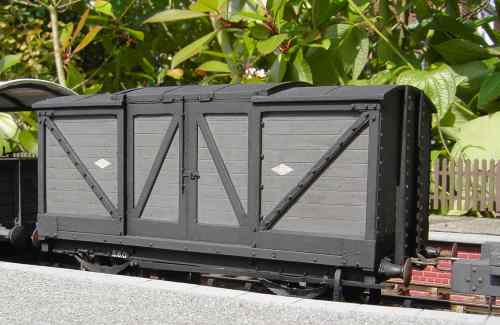 The price of this kit is £125 complete including wheels, couplings and transfers.